Love your work and work with those you love—that’s a powerful combination.

For Perry Lunsford, it’s easy. He loves what he does, and he loves who he’s doing it with, his closest business partner and confidant, his wife Jayme.

“My greatest accomplishment has been my relationship with my wife,” says Perry. “She’s my business partner in this venture and was part of my last venture as well. I’m an extreme person and for every yin, there’s a yang. My relationship with my business partner and best friend Jayme is my greatest accomplishment, end of sentence, period, end of story.”

The couple met when Perry owned a chain of fitness centers and after a while, discovered that they fit together perfectly.

The union of two people fitting together so perfectly has produced millions, literally. Together, Jayme and Perry, in a very short time, have built a business completely by referral and social media presence, which currently has Perry perched as the #2 personal producer of 2019 at USHEALTH Advisors®.

“My wife handles the back and front end of the business, I handle the sales,” says Perry. “Our stuff is 100 percent referrals and social media. Social media leads come in all day and all night. We get up at 5 a.m. and work them and go to bed at midnight, still working them. I know the business plan was our Facebook page and the initial goal was to get 100 five-star reviews in six months. A year-and-four-months into this deal, we have hundreds of five-star reviews and probably more reviews and comments from people we simply helped who couldn’t even become clients. We just helped and referred them out to find the right fit for their needs.”

Finding a way to help and serve, no matter the circumstance, is in Perry’s blood, since he knows the long road from some pretty humble beginnings to his current run as the self-proclaimed, #thehealthyinsurancedude.

“I grew up in Fort Worth, Texas, and we were mega poor,” remembers Perry. “Now I live in this beautiful, amazing home, and I got it for real cheap but growing up, I lived in two separate households. My mom was a hoarder, just like the people you see on those reality tv shows. My dad’s house was not much of a house at all. We didn’t have a carpet. We had particle-board flooring. That’s all we had—no paint or texture on the walls, just tape and bedding. There was no running water. We had to go out and get our own water in big buckets. There were plenty of us to feed—four kids, me and my two brothers and my sister. My parents were just content that way. My dad is a great guy, the nicest human being that ever lived. He believed if God wanted him to have more money, he would give it to him. But I’m different—I’m driven—and for me, it’s never enough.”

Not having enough and looking for more, once Perry was old enough and able, he joined the military, signing on with the Air Force. It opened his eyes, opened his mind, and changed his life. Military experience has a way of making you see things differently.

“When I joined, I had never read a book, except what they forced you to read in school,” says Perry. “I fought through dyslexia, but I was of above-average intelligence, and I went all in. Being in the military opened my eyes to meet different types of people from all walks of life, and it gave me mentors that changed my life.”

It’s the focus on constant daily improvement that builds the most successful human beings, and Perry takes it to heart.

“Now, I work every day and do things and think about how what I’m doing makes me better mentally and physically,” says Perry.

After a decade in the Air Force, and with a fresh mental acumen and physical presence, Perry immediately put his mind and his body to work on new ideas.

“I had an idea coming out of the Air Force about making money on social media,” says Perry. “It was 2005, the internet was still coming into its own, and I had this idea to have people go online, put their credit card number in, and then I would just show up the next day and mow their yard. I had about $60,000 I had earned from my time in the Air Force and invested in this business to build a team of people to mow residential lawns through this website I had built. The website was designed to look like a salon, I had really cool music playing all the time. I’d get e-mails at least once a week from people all over about how much they loved the site. One woman told me she kept the website up all day long just because she loved the music so much.”

The lawn mowing business was a huge success, but then the success of the internet and the big boys like Google got in the way. Perry says once Google maps came out and people could pick the closest lawn service, instead of the one with the slickest website, he could see that landscape was about to change. He’d soon be out of business. So, Perry sold the company and moved on.

The next venture was physical fitness and owning a slew of high-end gyms.

“I had a chain of fitness centers and we were on top of the world,” says Perry. “I’d do conferences with some of the most successful gym owners in America and things were going great. I built that business off of Facebook, too, but then Planet Fitness opened up and spread quickly, opening up literally next door to every club we had, with their $10 memberships. They simply had a better business plan, though the reason we stayed open and lasted as long as we did was we were always sales-oriented and focused on customer service. Those other new fitness centers could care less about that.”

For Perry, the silver lining in all of it was he met the love of his life, Jayme, and her three children as well. But when the work-out centers no longer worked out for the couple, it was time to take a step back, take a little time off, and do the one thing Perry had never done before, try and get a job.

“I just decided, well, I’m gonna get a job,” Perry said. “I’ve never had one, but it should be no problem where somebody will be willing to pay me a few hundred grand a year. That’s easy because I’m worth it. I never looked for a job in my life, but I have a cousin who is a mentor of mine and he makes seven-figures selling life insurance. Understand though, money has never meant anything to me, I don’t really care about the money, I just wanted to build something great, knowing and believing the money will eventually come.”

Perry continues, “This time, however, I had not sold my company, I lost my company. I didn’t have a giant nest egg. I couldn’t take two years to make a couple hundred thousand. So, I called my cousin and said it’s time for me to get out there and make money. He told me he’d been waiting for that call for 15 years, but he said he also knew I’d never come work with him. But he told me the strategy for wealth: you want a unique product, a residual business, money upfront, and a company that will market for you or at least help pay for it. I told him it didn’t sound like that exists.”

Enter USHEALTH Advisors®, though Perry’s entrance into the interview session was what he describes as an “interesting experience.”

“I had seen an ad for this strange opportunity, and my wife said, ‘Why don’t you go in to interview. You have never had to do that, you might as well practice.’ So, I go in and it’s a group interview. I look around and figure either I’m in the wrong place and shouldn’t be here, or the other people here are in the wrong place and shouldn’t be applying for this job. Then Nathan Scott walks in and gives his pitch.”

Perry says Nathan’s pitch was raw and real, and at first the two didn’t like each other much.

“But Derek Berry liked me,” says Perry. “And now Nathan and I are amigos.”

Perry and Jayme got right to work. The cure-all for anyone starting out or any start-up business is one thing: massive action.

They got started on social media and built a platform, eventually creating the #thehealthyinsurancedude Facebook business page and Perry shot out of the gate, issuing $280,000 in annual volume in his first 13 weeks. (The company goal is $100,000 AV for a new agent).

“I started June of 2018, and I’ve never blanked a single week, nor made less than $2,500 in advances in any week,” says Perry. “People go to my page and gain knowledge, so many times when we speak they are ready to make a decision and I help them find what works best for them. I’m so happy here and with what I’m doing, I’ve never been happier.”

Happiness includes the blended family he has with Jayme, his children, Jase and Cali and Jayme’s children, Cole, Holly, and Emma. The kids know each other from their days at daycare at the fitness centers. So, the merging of the two families was natural, and everyone gets along.

Perry has come a long way, but the way, at least for Perry, is never-ending. There is no land of OZ at the end of his yellow brick road.

“I really don’t feel like I’ve ever accomplished anything,” Perry says. “I hold myself to a standard of excellence that is uncatchable because it’s a carrot on a stick in front of me and the closer I get, the further it moves away. Success is something for other people to decide. I don’t feel like a failure but in my view, success means game over, and the game is never over for me.”

“I love the entrepreneurship of this company, and I will do anything to have a great career here in a fun, ethical, and awesome way,” Perry said. “I really hope when people think of me, they think that I really care and that I care more than anybody else they have ever met. I care about my clients, I care about this company and the people who work here. I’ve helped coach a ton of people I’ve never even met before face-to-face, just to help them. I want them and anyone, to think that guy is all in and he wants it and cares more than anybody else.”

It works—if you work and care more. 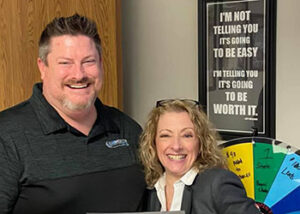 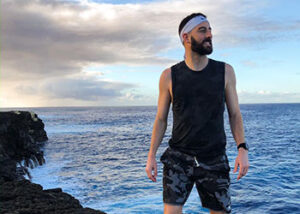