Who could have predicted that his success in business would begin on the fairway a quarter of a century ago? But for Brandon Bull, his drive to be the best can easily be traced back to the time he first held a golf club in his hand.

“I love golf, it’s one of my biggest passions,” says Brandon. “I started when I was 8-years-old and played every day until I was 18. I played on my high-school team and at the country club. What I love about golf is the fact that you are in control. You don’t have to rely on other people to make it happen, you will either have a great day or a bad day and it’s all up to you. The amount of work you put in will affect your game. You’ve got to put in a lot of work to get really good.”

25 years later, now age 33, those same words are the wisdom Brandon can share with a new agent joining his team – you’ve got to put in a lot of work to get really good. So much of what we learn and practice early in life become lessons that can serve us, or hold us back. For Brandon, there’s been no holding back. In life, in business, Brandon likes to take a big swing, then masterfully drop one in the cup.

Drive for show, putt for dough.

It’s a simple formula, create and learn the business yourself, experience great success, then show others how to do the same.

Since joining USHEALTH Advisors in the fall of 2017, Brandon Bull has been driving for success – personally producing more than four-and-a-half million dollars in insurance sales, with the coveted $5-million mark easily in his sights this year. Now, as a Field Sales Leader, Brandon is teaching his success to other agents and has helped lead his teams to more than $35-million in sales. In 2021, with much of this year still ahead, Brandon’s team sits comfortably in the top five in the country and still looking to finish at number one.

Brandon is proof that a decade of gaining the relentless mental toughness it takes to master the greens, has given him the ability in business to focus on his craft and the desire to win, to compete with the elite. It’s all modeled after two of Brandon’s heroes, Tom Brady, and Tiger Woods.

“Brady and Tiger are two competitors I admire greatly,” says Brandon. “I respect their ability to always stay focused, to work like they have a chip on their shoulder, and create reasons to compete consistently, even after they have achieved so much. They don’t just want to win, they want to dominate. Also, their mindset of being able to block out all the noise and be clutch in the highest pressure situations is unmatched.”

“I was already doing pretty well in sales before I found USHEALTH Advisors,” says Brandon. “In fact, it’s kind of in my blood. My dad was almost always selling, everything from newspapers to medical devices. I have an older sister who was successful in furniture sales and then helping to manage apartment complexes.”

“Right before USHA, I was in sales for an eco-friendly golf company. I worked my way up to a territory manager but didn’t see room for growth. My regional manager kept telling me I’d get a promotion, but it never happened.”

But what was happening, was Brandon still staying in touch with some of his high school friends, Jason Blank and Shai Hatuel. Jason and Shai were experiencing great success with USHEALTH Advisors and Brandon decided to tee it up and see what might happen.

“I started a little slow, for a short time I was part-time at USHA, but it didn’t take long for me to be all-in,” says Brandon. I love being around my friends, love the culture, and the income I saw others earning made it a pretty quick transition for me.” It was goodbye to the golf company and hello to a new career and the mission of Helping Other People Everyday at USHEALTH Advisors.

Brandon says his schedule for the first three years at USHA was pretty much the same every day – because he knew, just like in his golf game, discipline and process breed success.

“The first three years I’d get up and try and be the first one in the office at 7:45 am to get on the dialer at 8 am,” says Brandon. “I’d make calls and buy as many leads as I could, from 8 am to 8 pm, Monday to Friday. I’d maybe take a 20-minute break for lunch at my desk, but my day was focused on closing as many deals and buying as many leads as I could that day. Now, as a leader, it’s a lot more about helping the agents, spending one-to-one time with them and my Field Training Agents, to get everyone on the same page that I am.”

What’s just as important, and has been from day one, is getting that other important person in Brandon’s life on the same page as well… his wife Shannon.

“My wife and I knew each other from high school,” says Brandon. “But we weren’t together. I dated one of her friends and she dated one of mine. I’ve known her for 17 years now. We didn’t start dating until college… and got married last year.”

“Back in 2017, when she was still my future wife, Shannon was a bit skeptical about the USHA opportunity. It can be a scary feeling, going into commission sales. But when you’ve got a good woman by your side, who trusts in you and allows you to pursue this, it makes all the difference. I told her I was positive I could do this and she always believes in me. That goes a long way. I see a lot of other agents and even leaders who struggle to balance their life and a significant other giving them a lot of stuff about working so much. But to have someone in your corner and on the same page means the world to me. If she wasn’t on board, this wouldn’t have worked for me.”

Brandon’s recent marriage with Shannon has created a home with a couple of heroes living there. The couple has a dog named Tiger, named after Brandon’s favorite golfer and three months ago Shannon gave birth to their baby boy –  a bundle of joy they named Brady – after you-know-who.

Three plus years into his career at USHEALTH Advisors, Brandon says he’s enjoying the transition from agent to leader, but he also says it presents his greatest challenge since leadership must be earned and continually developed. It’s not simply a right of passage.

“Becoming the best leader I can be is something I’m continually working on,” says Brandon. “I’ve always been a pretty good salesperson, but leadership is tough. You have to learn to deal with all these different personalities and come to realize that not everyone is going to be like you. They may not reason the same way you do or handle their business exactly the same way. I’m usually a straight-forward right-to-the-point kind of guy and sometimes it’s hard to understand others. Also, you have to serve as a leader, not a manager. I took that from one of Troy McQuagge’s speeches at one of our meetings – your number one job is to serve and it is a privilege to be a leader. You can’t take your foot off the gas, you must go full out to give everyone the same opportunity you have.”

“I’m a really honest and caring person, as are a lot of people I see as true leaders. I love helping and making the agents better. You can tell when you see other leaders who enjoy it and seeing people succeed and others who are just doing it for the income. I don’t care about the title, I just want to grow a team and make more and more people better. My friends would say I’m a very honest person, I don’t like those who cheat or scam their way to success. You have to work, hard work is more powerful than any edge you might try to create for yourself. I get up every morning and look in the mirror, and when I do I see someone who cares about other people every day and is really grateful for the opportunity – to lead on a daily basis and affect the lives of those who come into our company.”

Brandon says while he enjoys the daily grind, he’s also looking forward to the future, for his team and his family.

“It’s a big goal of mine to be a great father and be involved as much as I can with my wife and my son, plus I want to have another child. It brings me peace to know Shannon and I are a team and my wife is there to support me and our son every day. The feeling of watching Brady change before our eyes, even after only three months, is unbelievable, it’s like nothing I have ever experienced before. The love you feel is incredible.”

Brandon says he also loves the feeling of seeing a new beginning, watching a new agent give “birth” to his or her business with USHEALTH Advisors. “That’s the most fulfilling thing with our career here,” says Brandon. “You can have brand new agents who are coming in, relying on you and never been in sales, and then turn them into great salespeople and see their whole lives change in a year or two. That’s why I love being a leader because of the impact we have on the agents’ lives. When you get a text from one of them that says, ‘thank you so much for all you’ve done for me. I never thought I would be in this position. It’s so great.’ “You read a text like that and you are just so grateful. That’s why I do this every day.”

“I like to win,” says Brandon. “I have always loved that feeling. I am terrified of losing and I use that same fear to drive me in business as it does in my golf game. I love having the last putt on the 18th hole to win after being three strokes down. Or trying to beat a fellow leader and become the number one Field Sales Leader. It’s the thing I’m always striving for on a daily basis, to be number one, to have that feeling of being number one is unmatched. I hate the feeling of losing. I hate being number two or number five, I always want to be number one. I said it before, I like to win.” 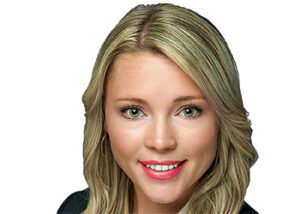