It only takes one day, or one moment to change your life.

For Lisa O’Brien and her husband Joe, it was only hours after they experienced the miracle of life for the second time. Shortly after their son Ethan was born, a little text would change the course of their lives.

“For years Joe and I worked in the restaurant business,” says Lisa. “In 2011 we were expecting our second child and living paycheck-to-paycheck. We had saved up just enough for me to take six-to-eight weeks off while caring for our new baby. Only one day after giving birth to Ethan by c-section, while still in the hospital, my husband got a message from one of his coworkers, who texted him to let him know something was up. Joe was a chef for a private catering company. The woman who owned the company ran out of money and had to shut it down. Joe tried to call her, but she didn’t answer. She ended up sending him the news in an e-mail.”

In a two-day span, the O’Brien family experienced the euphoria of a new life they welcomed with open arms and the realization another life and a new direction would soon be forced upon them. Holding their brand new baby the O’Brien’s were long on love, but without Joe’s job, short on cash.

“It was a tough time,” says Lisa. “We only had enough money for me to go back to work, not for Joe to lose his job.”

But right before the birth of her son, Lisa had learned about an opportunity with a company called USHEALTH Advisors and thought she might make the move.

“I had learned about USHEALTH Advisors from a high school friend who was doing well with the company. She asked me to check it out.  I did and I was ready to take the leap of faith. And it was definitely a leap when I started it. I used my maternity leave to study for the health and life license and to pass the test. When I got back to work I was still waiting tables at night, Monday to Friday, and working on my business with USHA during the day. When I started I honestly didn’t have the full support from my husband. We had a six-week-old baby and a three-year-old daughter. My husband was still looking for work, no money in the bank and now I’m was working a job that’s straight commission.”

Back in 2011, most of the sales for USHEALTH Advisors were done face-to-face which made it even more challenging for Lisa to get a good leg up, since she was working two jobs and helping to raise two small children. Admittedly she says it was a slow start for her, especially having to pound the pavement, but these days most of the sales for the company are on a virtual platform, allowing almost anyone to get off to a fast start.

Despite the slow, but steady progress at USHA, Lisa knew she had one thing going for her… her determination. She learned quickly that the power comes from within, that if you set your mind to something you can do it and do it well. Plus, Lisa says she’s wired to show what’s possible, especially against all odds.

Lisa’s perseverance is reflected in the numbers, she’s a $20 million team leader and has issued nearly $3 million in personal production for USHA.

“I knew I could do this,” says Lisa. “I’m one of those people who like to prove people wrong. When I have doubters that fuels a fire inside of me that makes me work really hard.”

It didn’t hurt that her dad had spent a long career in sales. Lisa grew up in Phoenix, AZ and her dad sold copy machines, by cold calling and prospecting, as most salespeople do. Then he’d button it all up with an in-person presentation.

“My dad took early retirement and then got the opportunity to purchase a pool business,” says Lisa. “He ran that business for about 14 years and sold it about a year ago. So now he is officially retired. Between both careers, he and my mom have done very well for themselves.”

The values Lisa picked up from her dad and also her mom, who worked just as hard as a stay-at-home mom with three kids, gave Lisa a serious work ethic and a winning personality that has served her well. Her work ethic, however,

waned a bit in secondary education.”

While attending college Lisa started waiting tables and so when she left school she continued in that industry – working as a waitress, a bartender and eventually a corporate trainer, travelling the country to help other restaurants launch their new establishments. It’s also while out on the road where she met her husband Joe and the two followed his career as a chef to different parts of the east coast, Virginia and Pennsylvania, before heading west to Chicago and finally settling back in the Phoenix area to leverage the support of Lisa’s parents as she and Joe built their careers.

The parental support ended up being key, as post-second baby, Lisa tried to work two jobs, while Joe looked for a new one. It wasn’t an easy road.

“We didn’t have enough in the bank when Joe lost his job, so we had to sell some belongings and vehicles,” remembers Lisa. “When I came on the scene in 2011, it was nothing like it is now with USHA, we got maybe 20-to-30 leads a week on a piece of paper, nowadays the leads are sent real-time through a CRM. I used to drive to strip malls and talk to business owners, and I just wasn’t very good at it. My only sales background had been as a bartender, upgrading someone’s tequila in their margarita was about the only sales experience I had going for me,” she laughs.

But as things started to click, Joe found a new job and with a better financial foundation building again, Lisa was able to step-up, while still enjoying the flexibility of being there for her Ethan and her daughter, Ella.

“The business really took off once we went virtual,” says Lisa. “There are more tools and resources now with the CRM system and the ability to hold licenses and purchase leads in multiple states, plus the sales training and processes. My Division Leader Dan Eddington came to Arizona in 2019 and brought with him a training program and a system that is measurable. And my Field Training Agent, Zach Lauer inspires me to push myself harder. Zach and I challenge our team to do the same. Plus there’s my Regional Leader Dan Ashfield, who has always been here in Arizona and Murph Lauer, who moved here from Illinois and made a big difference.”

Making a difference is what drives Lisa, especially as a Field Sales Leader, helping others to learn the USHA way.

“What excites me about my career right now is giving the opportunity to more people,” says Lisa.  “My goal in 2020 is to bring even more people into this opportunity and create more leadership roles for agents who are working toward that goal. Anyone can make this work for them. I have different people from different walks of life and different work experiences on my team. One was a banker, one worked in border patrol, one was a bartender, one worked at Costco in the food court, serving hot dogs and pizza and now she’s an awesome producer at USHEALTH Advisors.”

Lisa also likes to reflect on the gratitude she feels for the past eight-plus-years working at USHA.

“In retrospect, it didn’t feel good where we were at that time in our lives when I started this,” says Lisa. “But I wouldn’t be who I am today without those experiences. I wasn’t someone who came in and made six-figures in my first year as some people do, but I eventually did and it felt amazing. I still remember when we paid $1,800 for a minivan for my husband to drive around while I worked my two jobs. But then Joe found a new job and in a few years, because of my work at USHEALTH, he was able to buy his dream car, a fully-loaded Jeep Rubicon, and we were able to buy our first house. I still remember when Joe got that Jeep and we parked it out in front of the driveway, I caught him walking by, again and again, to take a peek at it. He said he couldn’t believe he actually owned it now!”

Lisa says her success through the USHA opportunity has allowed the family the freedom and flexibility to spend fun times together, including the dry camping trips they take, using Joe’s Jeep to find trails and other places to explore. Lisa says another of her happy places is being near the pool, or at the beach. The family lives not far from a town in Mexico, a resort town called Puerto Penasco also referred to as Rocky Point. It’s close enough for the family to take a quick weekend there to recharge and refresh, especially since Joe has since left his job as a chef and consultant, to help Lisa with her USHEALTH Advisors career and build her FSL team.

“Joe loves helping me out with the business,” says Lisa. “He’s building my Facebook page for me and he got some equipment recently so we can shoot, create and put short videos out there as well on social media. He’s very artistic.”

While Lisa says being a mom and balancing out motherhood, (Ethan is now 8 and Ella, 11), and the business has been a reach challenge, she also recognizes it as her greatest accomplishment and says it’s all because she’s inspired and challenged by her work and life with USHEALTH Advisors.

“My career was a slow build, but once it clicked things really took off,” says Lisa. “We’ll be coming up on our nine-year anniversary here in October and this has been a life-changing opportunity. It can be for anyone. I just want people to feel better walking away from me then they did when they first arrived. I want to make people’s lives better, I want to make their mindset better, to create more opportunities for people. What I really aim to do is to inspire people to dig deep and tap into their full potential. I’ve been given a great opportunity and I want other people to have that same chance.”

“The secret here is to hold yourself accountable, keep your promises to yourself and utilize the right tools and resources, which we already have here and which keep getting better every day. It really is what you make of it at USHEALTH Advisors. If someone works hard, is coachable, and takes advantage of and utilizes the tools and resources we have here, then it all works and ordinary people can do extraordinary things.”

August 4, 2020
“Your gift is the source of your value. Your value determines how much you make in life. You get paid...
Read More 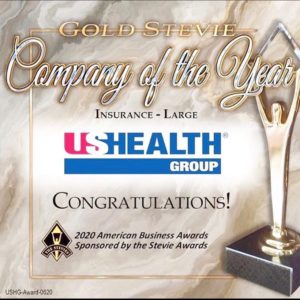 Stevie Awards 2020 – Company of the Year

July 21, 2020
USHEALTH Group is honored to receive a Gold Stevie Award for Company of the Year in the Large Insurance Company...
Read More