Chris Chamness will tell you himself this could be a very different story than the one we’re about to share, because, from day one on this earth, the odds were stacked against him.

“My mother gave birth to me when she was 16-years-old,” explains Chris. “Statistically, the child of a teenage mom, I should have never even had a shot at graduating college, much less be where I am now. I was born in Kenosha, Wisconsin and we lived at my grandmother’s house. When I was six years old, my mom packed us up and drove us down to Florida.”

“But there were challenges there as well, different apartments we lived in, and always on the move – we moved every year. There was a good deal of back and forth, and I ended up graduating high school in Wisconsin, living with my grandparents, because they had a more stable household at the time.

No childhood is perfect and we all come from places where, at one point or another, adversity presents challenges we’ve never faced before, that’s the uneven path of life. But not everyone succumbs to the pressure. There are those who rise above. Chris and his mom are two of those who chose to be the exception.

Life is all about choices and for Chris, a choice he made that helped define his life, was to participate in high school sports. He played football, but it was when he stepped onto the track that his life started to turn toward that north star. Chris soon realized his legs and his speed could take him places he never thought he could.

Once Chris started running he never looked back.

“It’s something I got into around 9th grade,” says Chris. “I won the state competition in track and that’s where I focused my attention. In 2014, I was an All-American track athlete, finishing third in the nation. To be an All-American athlete is one of my greatest accomplishments. It’s the same type of feeling I’ve had professionally, as I stepped up and started to build my team at USHEALTH Advisors.”

It’s the thrill of race and the conditioning it takes to be one of the best.

Chris joined USHEALTH Advisors in September of 2017 and has certainly kept pace with the competition, working his way into becoming a top producer. Since his run at USHA began Chris has personally produced more than $3-and-half million in sales and now, serving as a Field Sales Leader, Chris’s team is closing in on $19 million in production.

But once again it’s a story of success that almost never happened.

“In college, I majored in intradisciplinary studies with an emphasis in public health,” says Chris. “I thought I could be a health psychologist right out of college. I did a lot of interviews but got overlooked because I had no experience. By the time I was 24 I was still living with my mom but I wanted to move on and move out, so I started waiting tables and working at LA Fitness and there I got into sales.”

Chris continues, “during college, my favorite course in my major was the psychology of sales and applying those techniques to do your best at selling. I really liked that class and working at LA Fitness really brought out the salesmanship in me. You had to go out and prospect, make calls and persuade people to buy memberships. I became a top producer there, even worked my way up into management, doing the hiring, and training. But then it got redundant. I did personal training for a while, but it just didn’t pay enough. I was almost ready to sign on at a marketing company when Zeke Lever started recruiting me to USHEALTH Advisors. I had applied on LinkedIn and Zeke called me and simply said, “Hey bro, this is one of those calls. It’s going to change your life.”

Zeke set me up to come in and hear a presentation about USHEALTH Advisors from Jason Greif, (USHA Regional Sales Leader). Jason did the pitch and as I looked around at the people in the office experiencing great success, I had the thought and the mindset that if they can do it, I can do it. I was motivated to study and pass my test for my health and life license. I worked on it six-to-seven hours a day, and got through it to be able to join the company.”

At the same time he was preparing to transition to USHA, Chris says his girlfriend decided to make a move of her own.

“My girlfriend at the time left me,” says Chris. “She wanted to move back to Texas. But I was here in Florida and I wasn’t leaving, plus I really don’t think she had faith I would be successful.”

The dream in your eyes, your heart, and your mind is rarely seen by others, and while Chris says perhaps his girlfriend couldn’t see the same vision he did, he never lost faith. He was ready to go all-in, to rise and grind.

While Chris was excited to get going, he says he also came to USHA with a bit of a chip on his shoulder, thinking he could blow it up right out of the gate. But what so many of us in life forget when we start something new there’s a step you must take first… embrace the suck.

“I was a little arrogant at first,” says Chris. “Because of the success I had in sales at my other job, I came in thinking I would be very good right away. But I fell on my face and I was slow to get started. I was definitely a handful for my Field Training Agent, Sherri Matheney, she didn’t know what to do with me. But as I warmed up to Sherri, she warmed up to me and I slowly became one of her top producers. It was all about immersing myself in the training and the culture, just meeting everybody and being part of my team. Everyone is here to help one another.”

With the help of the team around him and the competitive drive inherent in Chris since his days on the track, Chris was off and running. Just last year, during 2020, the year of the pandemic, Chris’s FTA team produced more than $6-and-a-half million and he personally produced well north of $1 million in sales. Big numbers in tough times, but Chris says it was the team that rose to the occasion.

“Team building is so important here,” says Chris. “It’s the culture that you want to create. Your mantra is what your team mission statement is, and having the agents know that you care and be a servant leader for them – the goal is to give them the same opportunity you had. I think that’s such an important part. To keep your team members engaged, doing team outings, letting them know that this career is so much more than just selling a policy. I don’t want anyone to think I’m the king of the overrides. I want to see them reach the point where, like myself, they are financially free, in a position where you don’t have to worry about bills and be able to have the freedom to do what you want.”

“It’s so much about helping the guy or girl next to you, and help your friends and seeing them successful as well that warms your heart. I’ve brought athletes into this industry, so they know how to work hard and play hard, we grind together and we play together. We all want to be united, we’re not going to be divided. If there is a complication or issue we talk it out. And if there is a cancer on the team, we have to let that person go.”

Chris is also inspired by another successful team member in his life, his mom, Christina. Although battling through the challenges that come with being a teenage mom, Chris says it’s his mother who has proven you can rise above.

“My mom has also worked her way to success,” he says. “She eventually got her master’s degree in history. And now she’s a realtor and a very successful one. She’s making it and so am I.”

At USHEALTH Advisors, it doesn’t matter where you came from, it matters where you are now and where it is you want to go. What’s your dream? What’s your why and are you willing to work for it by helping other people every day?

Chris says he’s ready to do as much as he can to help others and do it by making sure they know they are cared for and that he’s got their back.

“If there’s one thing about me, it’s definitely that I’m loyal,” says Chris. “It’s my best trait. Being a Virgo, you are born to be loyal, trustworthy, and dedicated to your goals, just wanting to be the best and conquering everything. I want my team members to want the same thing. I’m caring, loving, and a straight go-getter. Being in leadership is about being successful and giving people belief. If I can do it, they can do it as well. Some people you recruit don’t always have that belief, but it’s just like being an athlete, you have to envision yourself there, being a winner, crossing that finish line.”

The finish line – a place Chris has crossed time and time again.

And even today, Chris is still winning, cause he’s still running.

July 12, 2021
Storytelling for Business: Be “Stop lying to yourself about who you are, and why you’re that way. That’s your fuel,...
Read More 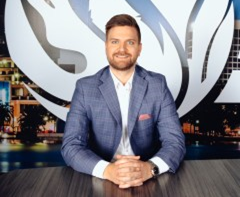