USHEALTH Group CEO is Honored as Executive of the Year, Insurance 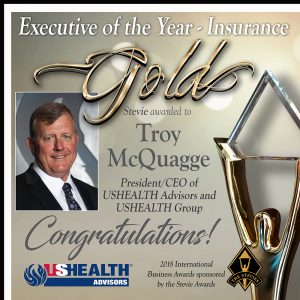 USHEALTH Group, Inc. CEO Troy McQuagge was named the winner of a Gold Stevie® Awards in the Executive of the Year category in The 15th Annual International Business Awards®.

The International Business Awards are the world’s premier business awards program. All individuals and organizations worldwide – public and private, for-profit and non-profit, large and small – are eligible to submit nominations. The 2018 IBAs received entries from 74 nations and territories.

Nicknamed the Stevies for the Greek word for “crowned,” the awards will be presented to winners at a gala awards banquet at the InterContinental London Park Lane Hotel in London, England on 20 October.

Mr. McQuagge joined USHEALTH Group, Inc. in 2010 and was named CEO of the company 2014. During his tenure, McQuagge has led the company through transformational changes that have produced remarkable business results that include a 2,800% increase in the value of company shares.

Stevie Award winners were determined by the average scores of more than 270 executives worldwide who participated on 12 juries.

“This year’s Stevie Award winners in the IBAs are the most distinguished group of winners we’ve had yet,” said Michael Gallagher, president and founder of the Stevie Awards. “We raised the minimum average score from the judges required to qualify as a Stevie winner, so 2018 winners should be especially proud of their achievements. We look forward to presenting their Stevies to them in London on October 20, and to telling their stories over the coming year through Stevie Awards media.”

Details about The International Business Awards and the lists of Stevie Award winners.

About USHEALTH Group, Inc.
USHEALTH Group, Inc. is an insurance holding company based in Ft. Worth, Texas focused on providing innovative health coverage for self-employed individuals and small business owners. The goal of USHEALTH is to combine the talents of its employees and agents to market competitive and profitable insurance products, while providing superior customer service in every aspect of the company’s operations.

Do It For Others – Ian Whiteman

September 28, 2020
It’s been a four-year run for which Ian Whiteman is extremely proud – proud to help, proud to serve, proud...
Read More

September 15, 2020
“In America in general, there are not a lot of single moms who have the opportunity I do. So many work two...
Read More

August 18, 2020
It’s been tested, demonstrated and proven time and time again through incredibly successful endeavors, that group culture is one of...
Read More