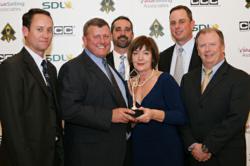 Quote start We are honored to have received this esteemed level of international recognition. Quote end

USHEALTH Advisors L.LC. was presented with a Silver Stevie® Award in the Sales Turnaround of the Year category in the sixth annual Stevie Awards for Sales & Customer Service Monday night.

“This prestigious award is a testament to the exceptional work done by the men and women of USHEALTH Advisors and our parent company, USHEALTH Group,” stated USHA president and CEO, Troy McQuagge. “It is a fitting tribute to our company’s ability to take an idea from conception to a successfully executed business strategy in less than one year.”

Brian Clark, USHA’s Chief Marketing Officer added, “This Stevie Award recognizes excellence in sales; and as a young and growing company, we are honored to have received this esteemed level of international recognition.”

Nicknamed the Stevies for the Greek word for “crowned,” the trophies were presented to honorees during a gala banquet on Monday, February 27 at Caesars Palace in Las Vegas. More than 350 nominated customer service and sales executives from the U.S.A. and several other countries attended. The presentations were broadcast live by the Business TalkRadio Network.

More than 1,000 entries from organizations of all sizes and in virtually every industry were submitted to this year’s competition, an increase of almost 30% over 2011. Finalists were determined by the average scores of 93 professionals worldwide, acting as preliminary judges. Entries were considered in 27 categories for customer service professionals, including Contact Center of the Year, Award for Innovation in Customer Service, and Customer Service Department of the Year; 38 categories for sales professionals, ranging from Senior Sales Executive of the Year to Sales Training or Coaching Program of the Year to Sales Department of the Year of the Year; and categories to recognize new products and services and solution providers.

More than 100 members of seven specialized judging committees determined Stevie Award placements from among the Finalists during final judging this year.

Details about the Stevie Awards for Sales & Customer Service and the list of Stevie winners in all categories are available at http://www.stevieawards.com/sales.

Be A Leader – Mario Garay

September 14, 2021
“Having sisters means you always have backup.” – Author unknown If a woman is one of the most powerful forces...
Read More

August 24, 2021
“If your actions inspire others to dream more, learn more, do more, or become more then you’re a real leader....
Read More

The Dance of Life – Jennifer Vossmer

August 2, 2021
“I hope you still feel small when you stand beside the ocean,Whenever one door closes I hope one more opens,Promise...
Read More