Stronger Than You Know

After reading his incredible story of heartbreak and willful perseverance you will understand why Andy Montague is Stronger Than You Know: 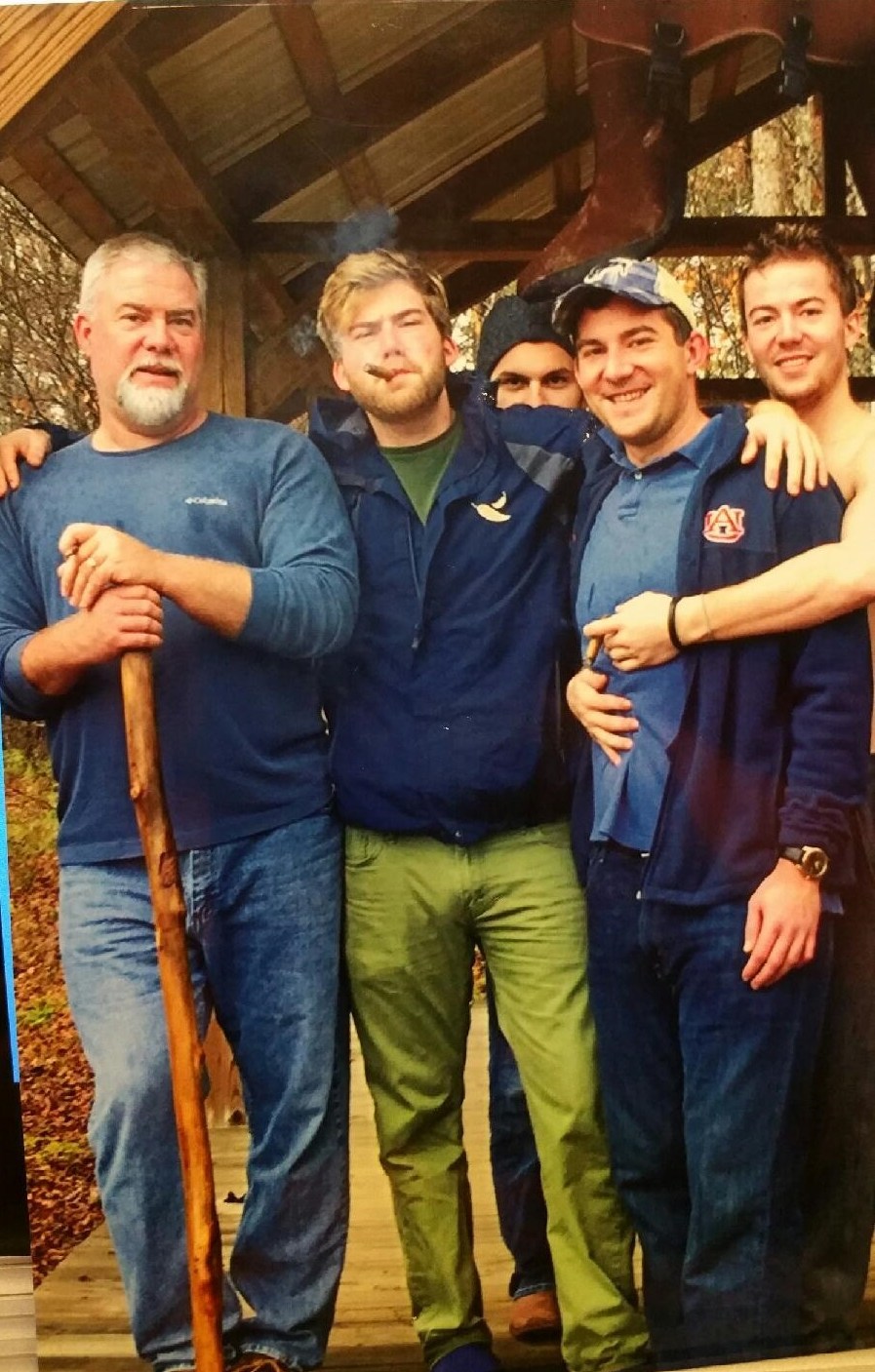 They call French the language of love. To this day, decades after he left college, Andy Montague is still one French final exam away from earning his degree. But Andy can teach you more about love than perhaps any man who holds that document in his hand. After all a degree can’t teach you about life, the best teacher you will ever find is experience and Andy Montague has had his share…and then some.

“I feel like there is a higher calling than me ever getting a degree,” says Andy. It’s almost a badge of courage. I totally believe there is not a college degree, not a test, not a course that can measure the heart of a man. It’s not about the “sheepskin” (diploma), it’s about what you are doing to help people. It’s about your work ethic and attitude. You learn those things in a different classroom…the school of hard knocks.”

The son of a hog and cotton farmer, Andy knew all about hard work from the time he was a little boy, as did his brother and sister who grew up under the no-nonsense guidance of their father Lou Montague. It was Andy and his dad who ended up creating a very successful land development business together, but that was after Andy’s first test in life, finding a way to feed his young family.

Andy and his wife Michele welcomed their son Christopher into the world while Andy was still trying to finish his senior year in college. To make ends meet and not rely on his parents for funds, Andy found the life insurance business, and A.L. Williams, which is today’s Primerica. Andy tried to go the broker route to earn a living, but it never worked out, he earned only a few thousand dollars a month and after eight years of fighting the good fight, bringing more children into the world, and barely being able to keep food on the table, Andy got out of insurance and started land developing and building homes with his father.

For more than a decade Andy and his dad developed about 250 lots and built nearly 125 homes in West Tennessee. Things were going great, until they weren’t.

Andy found he could build it, but no one would come.

When the financial crisis hit in ’07 and ’08, nearly overnight, the bottom dropped out. It dropped hard. Nobody could afford to buy a lot, or build a home. Andy was broke, going to the Dollar General just to buy groceries to feed his family and forced to sell many of his prized possessions, including much of his extensive gun and hunting collection.

At the same time Andy’s mom Peggy passed away and he and Michele were left to care for Andy’s dad who was in failing health, with medicines costing nearly $1,000 a month. Andy’s brother Tim still had a successful veterinary clinic, and was helping with the cost of the medications, but refused to give Andy financial help. “Being the good brother he was, he gave me the best help he could give me,” says Andy. “He said to me, ‘Find a way. I’m not going to give you any money until you help yourself.’ He saved me from becoming totally dependent”.

Find a way. Battle back. Save his family. 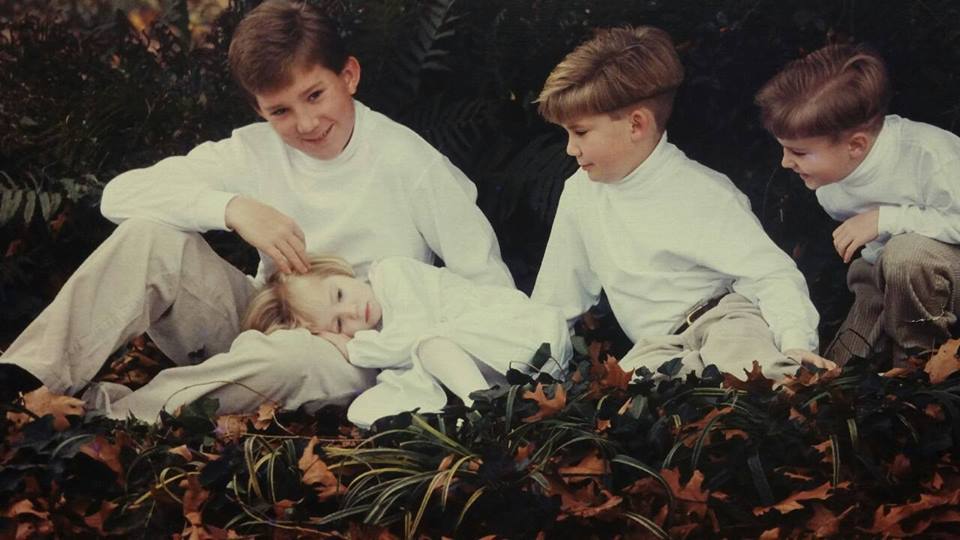 Kicking and screaming Andy went back into the insurance industry, he had no choice, it was the only thing he believed he could do to keep his family afloat. This time around it was mortgage protection, i.e. life insurance, with leads you had to buy. The job didn’t provide the income he was looking for, but the system taught him discipline and to do the one thing he hadn’t really done before – read books – lots of books. Andy read books on leadership by John Maxwell and books on human psychology, including the groundbreaking book, Psycho-cybernetics, by Maxwell Maltz, about how to make happiness and success a habit. Andy’s parents, Peggy and Lou, had also worked as Dale Carnegie instructors and when his mother passed away Andy says he went and grabbed the book off the shelf, it still had her notes in it. The book helped change his life.

What also changed his life was a meeting with Taraina McCants in late 2009. Taraina was working at an insurance company called Security Health Advisors, now known as USHEALTH Advisors. As the two like to say, it was respect at first sight, and a new business relationship began. It was a good move for Andy. He says his first customer was epic: “I put an application in on a Wednesday, she got approved by Thursday and on Monday morning $1,100 was in my bank account. I figured if I could duplicate that six days a week, we would be OK. Find people who need me and help them become my customer.”

Things were good, Andy was an all-star agent and rising in the ranks to lead a Division. But one of the greatest challenges in life, the one perhaps we all strive for, is to get the wheel of life in perfect balance, to shape it into a perfect sphere. The reality is many times there is a jagged edge. Something which doesn’t quite go right, and it seems impossible to simply roll along with ease.

For Andy and Michele, their challenge was their oldest son, Christopher. While Andy was enjoying great business and financial success, life with Christopher was on the rocks. Andy says his first-born was a very quiet young man, but with so much charisma. He had starred as an offensive lineman, playing the blind side, left tackle, for Harding University in Arkansas. Christopher loved writing and pursued a degree as a history major, but he soon became depressed about his future in this field and started drinking to ease the stress.

The drinking led to arguments, and by age 23, Andy and Michele made the decision to force their son out of their home. “We thought he was just trying to throw his life away”, says Andy. We decided the best thing for him was not to enable him and let him stay in our house. So he started living at his friend’s apartment. He was mature, but he had a drinking problem.”

Eventually Andy convinced Christopher to come work with him at USHEALTH Advisors and Andy says his son learned fast. “He really got his arms around it,” says Andy. “He was good at it, showing other people how to do it. He became the strongest leader in my office. He was trying so hard not to drink, but at time he still did. There were long stretches when he didn’t, but he was still an alcoholic and he ended up with a DWI charge. A man at church, the vice-president of the biggest bank in our county tried to help Christopher. He had relationships in the court system and was also helping Christopher to pray and fight his problem. He was very, very helpful.” 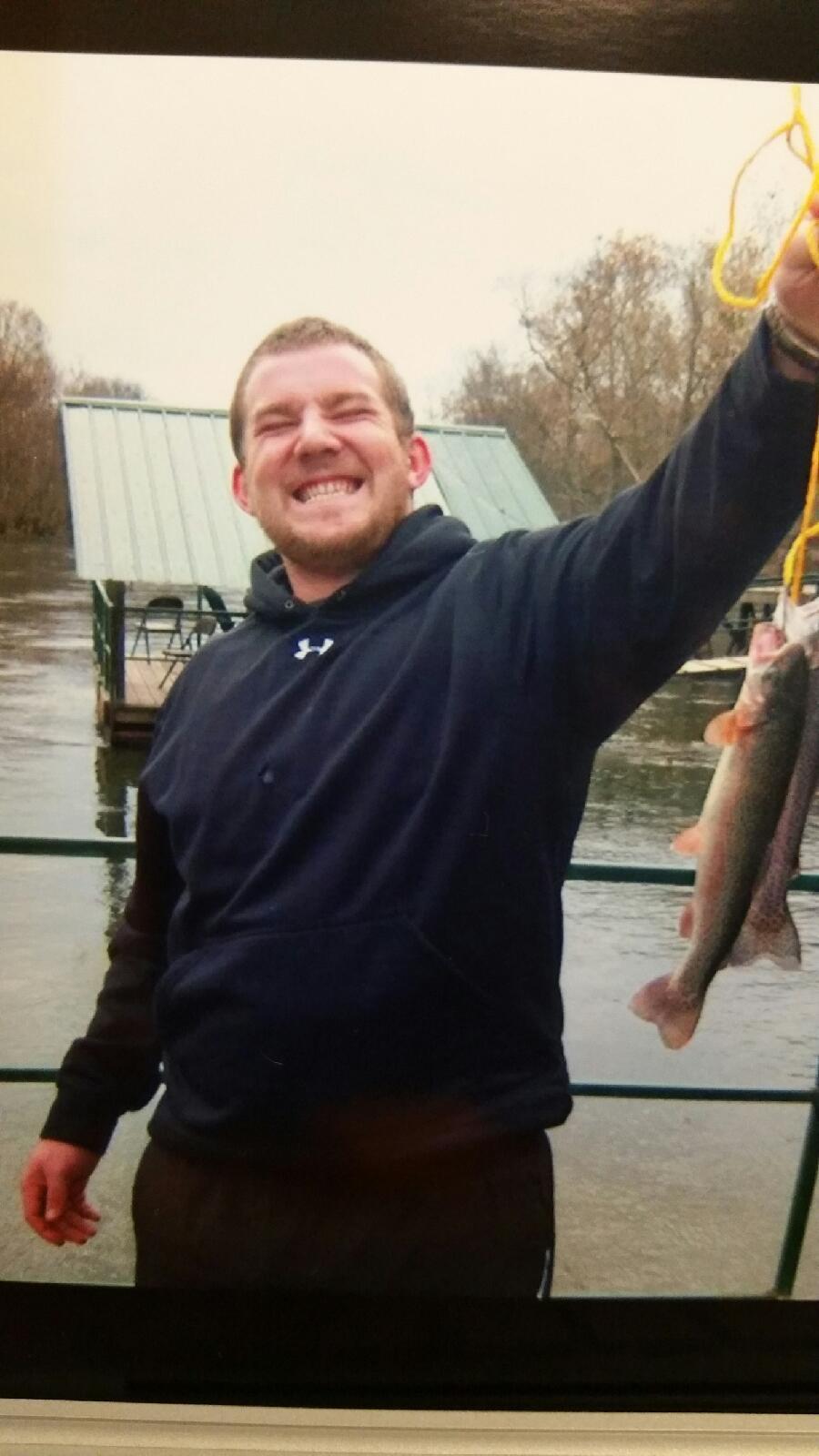 The business success continued. Christopher ended up being asked to move to Atlanta and recruit and train there as well. He won the Phoenix Award at USHA, the highest award possible for a Field Sales Leader at the company and as Andy describes it, “was a very, very proud moment for me and for him. You can see it in the picture of him holding the award, it was just amazing. In the profile video the company made with Christopher he said, if could make his parents proud, that was the biggest award he could ever get.” 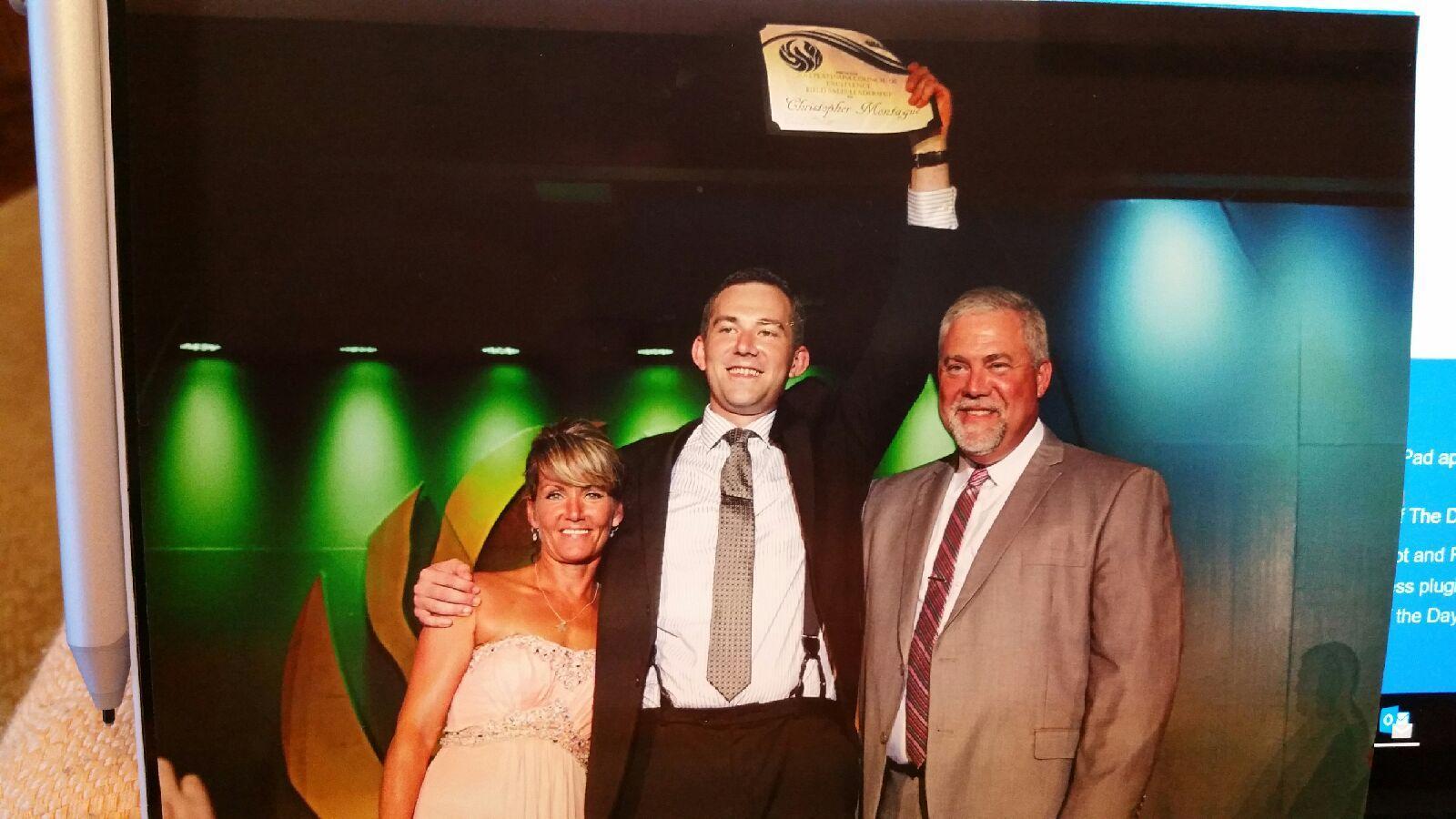 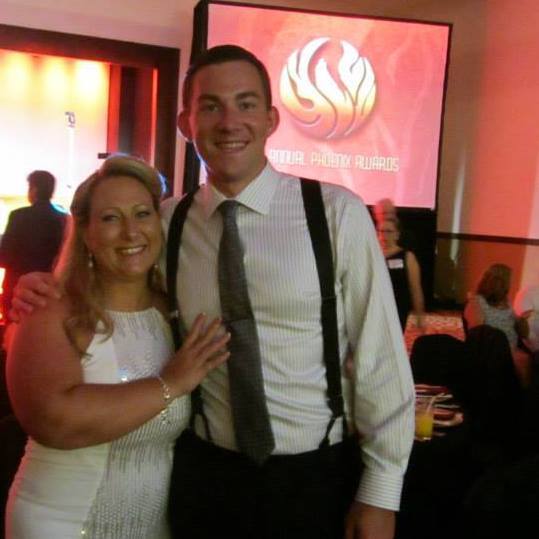 But sometimes awards and adulation aren’t enough. Christopher couldn’t stop what he started. He found trouble fighting the urge to drink, even occasionally. As Andy describes it, “when you fight the urge for 23 hours and 55 minutes a day, those five minutes you don’t can blow the whole deal.”

In the spring of 2015 Christopher was actually in the process of moving back to Tennessee. He had a girlfriend he had met over the Christmas holiday and Andy says he and his wife were thrilled their son would be moving back to their home town. But in May, Christopher had to return to Atlanta handle a probationary matter related to another driving under the influence charge. Andy says he actually had worked that day and made a great sale, but while he was there, on his own, it happened again. Christopher decided to drink, he had an accident and was charged with yet another DWI.

It was the last drink Christopher would ever take and he decided the last day he would drink from the cup of life. On May 16th, 2015 the family was notified their son was gone.

Andy says he knows his son thought this latest DWI charge would embarrass his family and the company and he exerted what control he had left.

From the depths of life’s darkest moment, to somehow seeing the light.

“It all came rushing into my brain that day when we learned he had taken his life” says Andy. “No, he wasn’t trying to throw his life away, he was just trying to fight the disease. He was a mild-mannered, charismatic, quiet professional, just trying to be a southern gentleman. He loved being with his family, he just wanted to do things right. He just couldn’t go on.”

“The second thing that floated through my mind was the health of my family, looking around at them grieving. Fortunately the support from our church, the community and the entire USHEALTH Advisors family just flooded in. It was amazing and inspiring.  And we decided as a family we would be defined by this, but not in a negative way, instead we would help more people because of this. Christopher loved helping people, helping people who had no idea what they were doing at first, and helping them to start amazing careers for themselves. It has inspired me and my family to become better in every single way. Christopher loved the Ben Franklin 12-week course about getting better and every day he recited the Ben Franklin prayer, it was part of his fight. But words and willpower only go so far, at some point you need a program to handle this very insidious, insidious disease.” 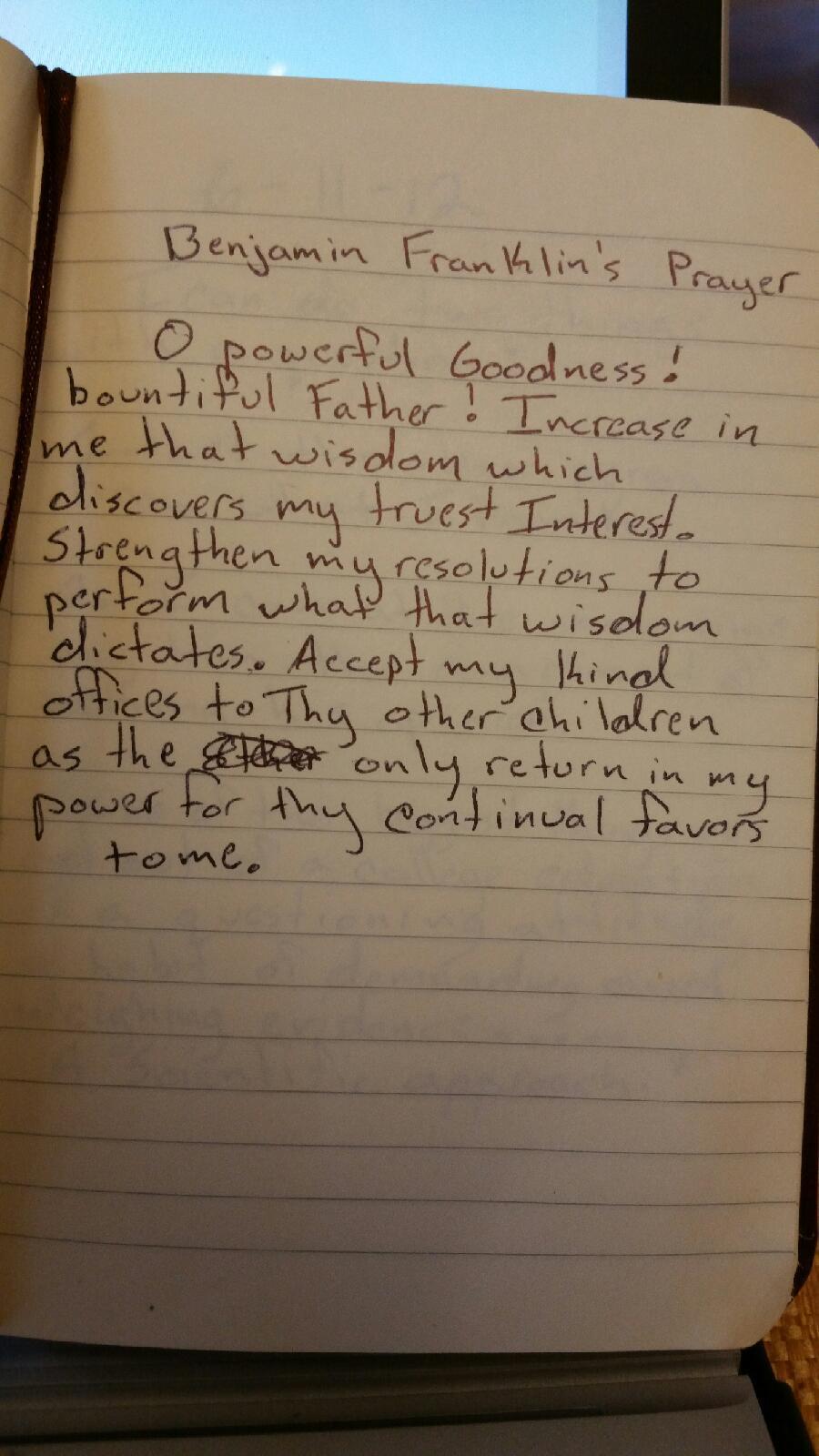 Andy says he has learned so much from losing his son: “We are not promised anything. We are begged by God not to be in love with this world. If you practice faith, then at some point in time, when the tough times come, it will pay off. Your love for you, your love for mankind and hope are the only things that really exist, the only things that really bring any fulfillment. Helping other people is the only thing I know of that is an ever-refreshing source of fuel. If a person is involved in something that is helping other people you never get tired of doing it. Going through this it’s the only thing I totally, totally get. But I also know this, we have decided what our story is going to be, and our story is going to be strong.”

Stronger than you know. 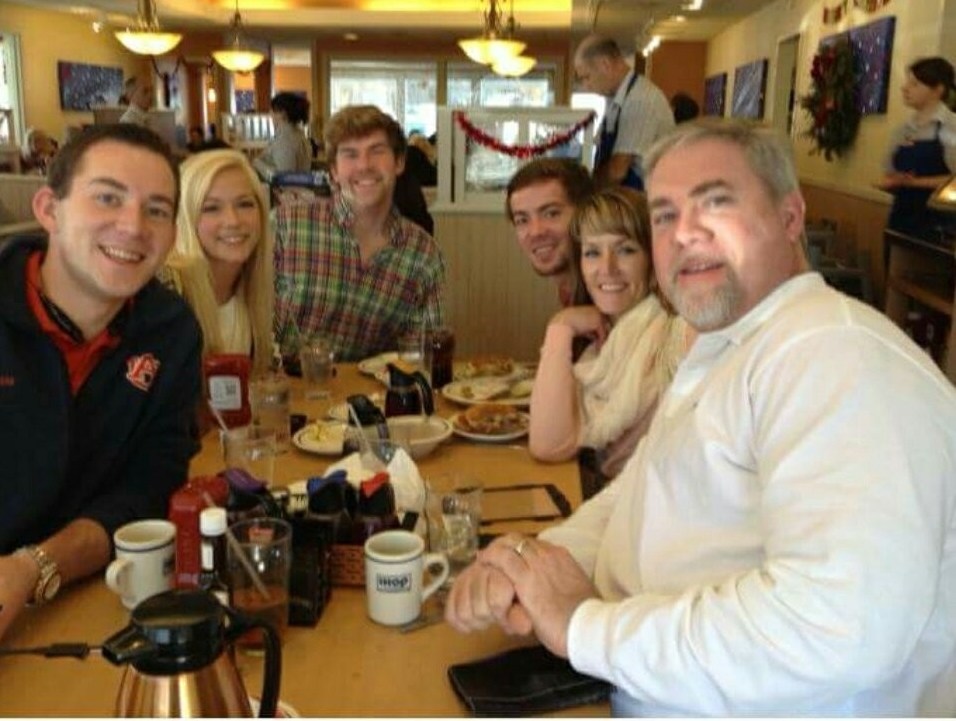 June 7, 2022
When you use an excuse for not accomplishing something or not completing a project, you are actually giving power to...
Read More

May 3, 2022
The sweet taste of freedom. It’s something we all take for granted, but not Landis Barrow. For a quarter of...
Read More

A Bag of Chips – Bryan Velasquez

April 12, 2022
“Even in the beginning, it made me realize what I’m capable of. And that’s what it does to anybody who...
Read More